On the Danger of Idiots and the Necessity of Dumb Oxen 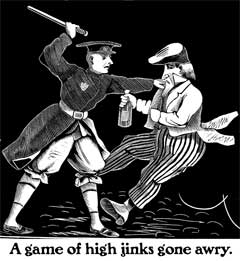 Having read somewhat on the subject of homeschooling, including what has been called "The Thomas Jefferson Education" as popularized by the same folks who established the nearly disintegrated "George Wythe University", Milton's claim (as I understand it) that studying the literature of past sages offers the ideal gateway to all other skills virtues is a familiar concept. Praxis, at least as it pertains to non-mathematical studies, is left to develop as a natural outgrowth of sound moral study. I agree with Milton, at least insofar as his examples of those engaged in law or illustrates. In contrast to those who are


...allured to the trade of law, grounding their purposes not on the prudent and heavenly contemplation of justice and equity, which was never taught them, but on the promising and pleasing thoughts of litigious terms, fat contention, and flowing fees...

or to state affairs by the love of flattery,exchanging wisdom and virtue for the currency of well-worn aphorism and favors. And I agree with Milton that it would be better that such empty souls spend their lives in self-interested frivolity than that they thrust the burden of their ignorance on the rest of us by so-called civil service. An idiot in the legislature is worth two in the tavern, I suppose; the former knowing only enough to be profoundly dangerous.

But this approach seems to neglect the real public need for trade-centered education in elevating those who were not blessed, as Milton, with ample leisure in the library. Some folks are required to pull as an ox before conversing in the cart. Learning the mechanical arts of butchery, carpentry, or plumbing may deserve, in some cases, a higher priority than the language arts. In our time, these trades may be the means by which a student is able to put himself through school and begin to elevate his station. In this way, practical learning - coupled with the essential grammar of basic morality and frugality - tills the soil wherein lofty humanism can grow.
Posted by lionbox at 12:22 PM