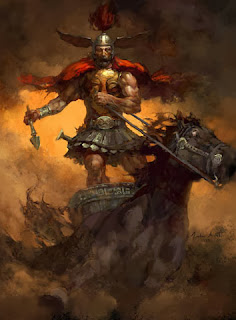 What makes a character a hero? Is it great accomplishments, firm morals, courage to fight through any situation? Talking about Satan as a hero figure in class on Wednesday made me realize that he is not much worse of an individual than many of the great heroes of the Greek epics. Think about Achilles, the great "hero" of the Iliad, was he really any better of an individual than Satan? He didn't rise from the depths of defeat, he groveled in it, quit when he was offended, and channeled his rage into nothing more but blind revenge. Achilles might have been the devil who would start a war with heaven anew. I never liked Achilles nor did I even seen any heroism in him at all, at least in his depiction in the Iliad.  It's an interesting comparison to think about. Satan's journey to earth also contains a lot of parallels to Odysseus's journey home. Both are portrayed as masters of trickery, deceit, and disguise. One was considered a great hero, while the other the reason for all unhappiness in the world. But are they really that different in character? I feel a little better sympathizing with Satan considering 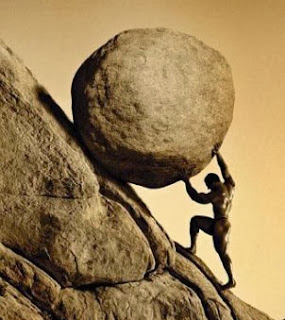 Achilleus and Odysseus weren't the most heroic of figures. Oh and they were both favored by certain gods as well. Satan had nothing. Perhaps that may be the root of our sympathy for the devil in Milton's great tale. Satan has all odds stacked against him (like GOD) and yet still he finds the strength within to fight a losing battle. Thankfully none of us have to fight such a fight, nor do I think we would ever want to. If the devil can use revenge, hatred, and his suffering to push towards a hopeless goal, can't we fight on even stronger terms against him to do what is right and survive this mortal experience? Unlike Satan or Sisyphus, the rock we roll up the mountain of our life will reach the top, and we aren't the only ones pushing it.
Posted by Unknown at 10:49 PM