As a novice in regards to Milton and his works, delving into the deeper themes of his texts can be a daunting task. However, there’s a chunk of Milton’s timeline that stick out like a sore thumb, quite visible at a cursory glance. 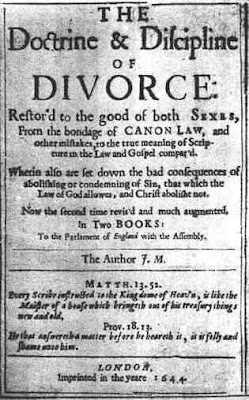 The author’s divorce tracts seem like an odd addition to his repertoire. They’re not elegant like his sonnets, or chalk full of imagery like his prose, and there aren't passages as striking as Lucifer chained in a lake of fire. They’re rather different, but  they do highlight a few of Milton’s that lend a different perspective to his other works.


Here’s a man who has been schooled in Greek and Latin and literature practically from birth, and he’s not writing his beloved poetry or playing the organ but is instead writing religious and political papers despised by the Church and a good portion of the populace. “Milton the Divorcer” is hardly a flattering nickname. But he kept writing, and these tracts along with his other political writings reveal a spirit of perseverance.

From his five major divorce tracts the reader learns Milton was stubborn, and not just because he wrote five essays about divorce. Milton possessed a creative urge of such proportions that even the wrath of the Church couldn’t slow him down during the eighteen month period in which he penned the texts. These papers also show an integrity to personal ideals and opinions, and point to his humanistic tendencies, a topic which pervades his other works. While they are not perhaps as famous as Paradise Lost or his other major works, the divorce tracts lend a different view on the author, and through them the reader can see a different Milton, one more human and feeling.


Milton’s Doctrine and Discipline of Divorce can be read here, along with some pretty handy commentary explaining the background and terminology.
Posted by Lainey at 8:15 AM

Email ThisBlogThis!Share to TwitterShare to FacebookShare to Pinterest
Labels: posted by Elaine