As I explored the internet for Milton-related topics, I thought to check out Twitter and the #JohnMilton and #ParadiseLost hashtags. I was surprised to see rather pithy quotes from Milton in random tweets. One tweet that piqued my interest was a link explaining the significance of Milton changing Paradise Lost from ten books to twelve books after publication. Immediately, I jumped on that intriguing idea! However, after perusing Google, I did not find a satisfactory, essay-worthy answer, although I will be on the look-out. Nevertheless, those hashtags did lead me to this website. 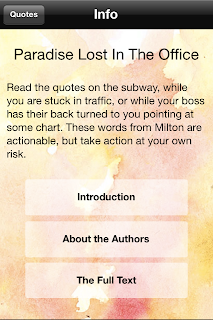 Yes, a Paradise Lost Office App for smartphones! Jason Braun, a poet, musician and professor at SIU, designed the app in an effort to educate others about Paradise Lost and give it a "more modern and practical context". His intent was to create an app like a deck of flashcards, easily read and easily applied to one's life. After downloading it myself, I think it is a little strange to have the prompts at the bottom of each screen, but it is a neat selection of quotes. It is also free and contains the entire work of Paradise Lost within the app. The comments are meant to connect Milton to modern society, but sometimes appear as trivial or crude. For instance, regarding the description of Eve in Book 4, lines 304-308, the app responds, "Have you met the boss' daughter yet?" I don't think Milton would want his masterpiece to be reduced to that, even if it does show the temptation of what one can't have.

In the article Braun says, "That quote from Milton can be shared via text message, and email at this time. You can flip through to other “flash cards” with other quotes, or click to go to read the full text of Paradise Lost as well. But most of all, this app is about presenting a modern and practical context for Paradise Lost, and serving it up in smaller bites. Paradise Lost in the Office is about pretending to pay attention to the PowerPoint presentation, but really indulging in classic literature while asking yourself “What Would Satan Do?”" Braun's idea is comprehensive enough, yet I do not understand this tagline which he includes in the article and the app's introduction..."What Would Satan Do?" Personally, Paradise Lost is not about Satan's mischief, but rather a unique interpretation of the Fall, including Satan's perspective. 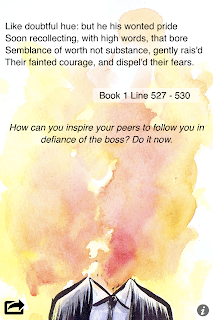 The concept of introducing the world to Paradise Lost and John Milton through an app is a great idea, but I believe Braun may have focused too much on Satan's roles and lines. Braun quotes General Electric's CEO Jack Welsh as saying, "Be number one or number two in every market, and fix, sell or close to get there." As a lover and reader of Milton, it is difficult for me to interpret lines in such a cavalier manner.That being said, it is an app for those in the office, so perhaps, as a student, I am not the best reviewer!

Email ThisBlogThis!Share to TwitterShare to FacebookShare to Pinterest
Labels: posted by Ashley