It's Time: Milton's Manipulation of Time in Paradise Lost 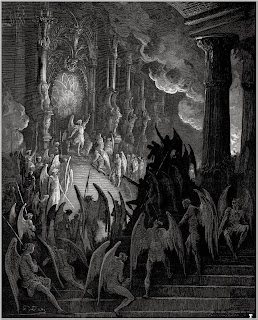 In class, we talked about how Milton bends time and takes things out of chronological order, but he does more than that with time in Paradise Lost. I noticed in particular with the meeting of the fallen angels. He mentions devils such as Moloch, or Beelzebub and then proceeds to mention a lot of their deeds and how they have affected men and such. However, while these things according to chronology haven’t happened yet, they are referred to as the past. An example is when one of the demons, Moloch is described by his actions toward men: "the wisest heart / of Solomon he led by fraud to build / his temple right against the temple of God" (400-02). Here, Moloch's actions are described in the past tense, even though they haven't happened yet in the narrative. This is done for several other devils and fallen angels. It's an interesting paradox that I decided to research more.

I was reading an article by Amy Boesky that talked about how Milton was bending time and it mentions allusions. One particular line says “To allude in literature is often to refer back to a previous event or image, but Milton’s allusions make history and narrative multivalenced and multitemporal” (381).  In a sense, Milton is making allusions with these devils to things that, according to the narration, hasn’t happened yet. This is a case of Milton, once again, taking a well-known literary element or technique and tweaking it, making it his own. He’s taking an allusion, which normally relates to people or events of the past, but uses it as an allusion to things the devils will do in the future, but treating them as if they have already been done. And this manipulation of time is added on top of Milton messing with the chronology of the story, which gives time its multiple perspectives.  He’s compressing, bending and combining time, giving it several layers.

We talked in class how Milton could be imitating the perspective of God, who sees past, present, and future. We also talked how on the other hand, he could be imitating the perspective of the devil, which is why the devils have been humanized. An idea I had was that Milton was putting the reader in a perspective beyond God and the devil’s perspective. It sounds crazy but it makes sense because we see simultaneously Satan’s situation, and God’s situation and we know the future, the past and present. We also see the human emotions of Satan and we gain an understanding of that.  We see from both perspectives and beyond them. I think that’s what Milton was trying imitate with his portrayal of time.

Boesky goes on to argue that Milton bends time in order to bring attention to The Fall and show its purpose of making time chronological when it wasn’t previously. It’s an interesting thought and I’ll have to watch out for how time is represented when we get to the Garden of Eden in Paradise Lost.