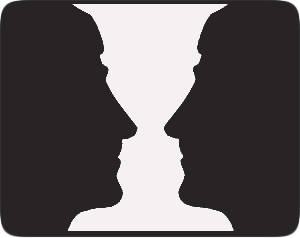 The more I read of Milton and his life, the harder it is to find a place for him to fit in! He seems to be made up of opposites and at once categorized by both and neither opponent. Here are just a few of the "contrary" elements I've been noticing:

It would be one thing to find traces of these things throughout his work, but often times, his work gives off strong traits in both persuasions. For example, the complete nature of Paradise Lost is at war with itself: the greatest Christian stories are housed and illuminated in the greatest Pagan form of literature. A "dove-like" (ln 21) Muse? His ambition and humility are not any more hidden. He says openly in the first lines that his work "with no middle flight intends to soar/Above th' Aonian mount, while it pursues/Things unattempted yet in prose or rhyme" (ln 14-16). No room for interpretation there. But at the same time, he implores the aid and teachings of an outside party. He is not only open to reform, but seeks it out before the last lines of the first stanza with the simple words "Instruct me, for thou knowest" (ln 19).


Critics have also commented on the seemingly contradictory effects of his work: Thomas N. Corns says referring to a religious pamphlet, "Note how the vocabulary from the proof text becomes the vocabulary for Milton’s own prose. Paradoxically the effect is both unspectacular and very striking. Milton is locking his imagination and his eloquence within the constraints of the biblical idiom in a way that manifests a new humility to the revealed word of God" (page 113).

While much if not all strong characteristics Milton possesses seem at first glance to be at complete opposition, they do not actually refute one another. What ends up happening is that each is made clearer by the contrast. The opposites live in harmony and reflect the beauty of the Other. Without his humility, for example, his ambition would be Prometheus-esque. leading to potential downfall. On the other hand, without a kind of other worldly ambition, he probably wouldn't have written at all.  And so we find in him the link, the bridge between humility and aspiration, Christian and Pagan, obscurity and clarity.

P.S. This video has some amazing imagery concerning blurred lines between opposites. Enjoy!

Email ThisBlogThis!Share to TwitterShare to FacebookShare to Pinterest
Labels: posted by Jessica