On the Dangers of Becoming Dead Men's Tombs

Though Milton's homage to Shakespeare (see: On Shakespeare) is well deserved, an assumption that would no doubt be defended by youth whose only exposure to The Bard came through the mouths of Claire Danes and Leonardo DiCaprio, but it brings to mind a danger inherent in education: universal reverence for past masters may encourage cultural serfdom, stifling creative and critical thinking in the present.

Again, I bear Milton and Shakespeare no disrespect. Frankly, I know neither of them so well as to contest their acclaim, and what I do know has lead me to reverence those names as well. Further, Milton and Shakespeare stand as examples of what a balanced education can produce. They didn't simply seek to recreate the past, but to reinvent it. What brings to mind the danger I referenced is the similarity between Milton and Christ's imagery: 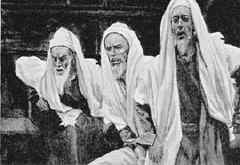 Woe unto you, scribes and Pharisees, hypocrites! for ye are like unto whited sepulchres, which indeed appear beautiful outward, but are within full of dead men's bones, and of all uncleanness (Matt. 23:27).

What needs my Shakespeare for his honored bones to labor of an age in piled stones... thou our fancy of itself bereaving, dost make us marble with too much conceiving, and so sepulchered in such pomp dost lie that kings for such a tomb would wish to die (On Shakespeare).

Email ThisBlogThis!Share to TwitterShare to FacebookShare to Pinterest
Labels: posted by Jake