The Influence of Dictation: Writing By Voice 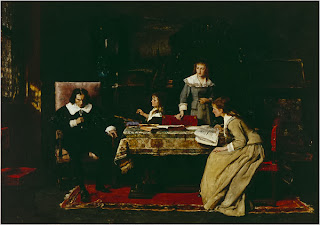 The more I continue to listen to Paradise Lost the more fascinated I become with the fact that Milton dictated the entire epic. Composing verses in his head, committing them to memory, and pulling them out later for dictation, what a mind! The idea makes me wonder how dictation would have affected Milton's work and how different methods of transcription influence the writing they produce. Does Milton's epic find its greatness from being created orally rather than constructed on paper?

First of all the work is transmitted through another human being. It becomes a performance, to a certain degree, subject to the reactions of the transcribers, and would seem to force the author to become more self-conscious of the work he is creating. I found an interesting article that contrasted this setting with the rise of other sorts of transcription, especially voice recognition software that has been rising in popularity among writers. One author, Richard Powers, described the idea as "a return to 'writing by voice' as done by authors through history."

However, is this the same sort of dictation? Can a machine have the same influence as a medium as another person. The article suggests that "though dictation itself is not new, dictating to a human is not the same as dictating to a machine. For one thing, a human transcriptionist responds, even if the response is pre-reflective—laughing, crying, flinching—the transcriptionist is a substitute for the author’s body and that body reacts."

Interesting ideas, to say the least, especially in the context of how we write and transcribe today. How do they really change writing? Is it for better or for worse? Does it actually make any difference in voice or product? As I listen to Miton's epic I can't help but feel that it's greatest power comes through hearing the great epic from the actual voice of a Muse of sorts, "singing" to us Milton's attempt to justify the ways of God.
Posted by Unknown at 10:36 PM