Hello, everybody. My name is Carmen. I enjoy ginger ale, cleanliness, and the wild west. My favorite poets are Cummings and Bukowski, and I aspire to be compared to them--poet to poet--at some point in my life. I'm a junior/senior studying English and any future involving the National Geographic magazine would simply set my heart aflutter! I'm not a cold person, but my default face looks mean. (I'm trying to be better.) Please approach me, because I would love to chat.
Babies kind of intimidate me because I feel like they know a lot more about 'all of this' than any of us do, BUT I try to hold and interact with as many as I possibly can because I've found that they possess an unspeakable quality that seems to heal a shriveled, blackened part of me that I have previously believed to be forever maimed by the world forcing me into it's den of cynicism and despair. Also, their eyes are full of wonder and they make silly noises. And those mini toes? Irresistible.

In class, Professor asked us why we were studying Milton. I didn't say anything. My reticence had less to do with my general reluctance to speak out, and more to do with the fact that I am really only in this class because the other Major Author courses interested me far less than this one did...and I was a bit embarrassed to admit that I don't have an affinity for Milton at all.
I've read a bit of Paradise Lost--enough to know the story--but I have yet to delve deep enough to develop this sort of admiration that many of my classmates seem to have for it. I know it's one of those classics that, not only the English Major, but anybody who would identify themselves as a "reader" should be familiar with.
I've found that I seem to unconsciously shy away from many works published before, like... the 19th century. And I know that includes so many influential reads, including Paradise Lost. I would love to get to this level that some of you have reached because you just seem to adore this work. Please help me out! I'm very excited to get started.


Here is a picture of me and Ben and the ranch. 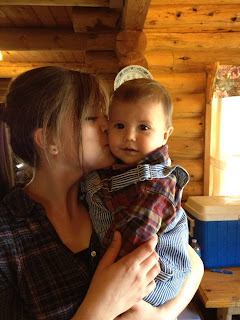 (Don't be shy--bring them along:
any babies of the Adorable persuasion are permitted.)
Posted by Miss Anthropy at 11:01 PM