In the first few lines of The Fifth Ode of Horus Milton addresses a figure named Pyrrha. This character ofGreco Roman mythology figures quite heavily in the rest of the poem, though only by reference, and knowing who she was helped me clear up some of the seemingly random imagery present later in the text. 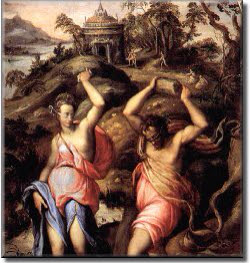 According to myth Pyrrha was a queen in Bronze Age Greece, ruling over the northern lands with her king Deukalion. Zeus, or Jove as the Romans called him, became angry with the violence and pride of the people and sent a "Great Deluge" to wipe them out. Prometheus warned Pyrrha and her husband of their impending doom, and the couple managed to escape the water's wrath and float on a small raft until Zeus' anger was appeased and he lowered the tides. Having survived the divine punishment, Pyrrha and Deukalion were charged with repopulating the Earth. The Oracle at Delphi told them to cast the bones of their mother over their shoulders, at which Pyrrha was understandably distressed, until her husband reasoned that Gaia, the Earth, was their mother and the stones must be her bones. They cast rocks over their shoulders, which turned into human beings, thereby saving humanity and ushering in a new age of prosperity.

While this is a lovely story all on its own, Pyrrha's place in The Fifth Ode of Horace can be seen as an explanation for Milton's references to water and storm. In lines six and seven we find "Seas / Rough with black winds and storms," in line eleven "flattering gales," and, perhaps the most striking, the last couplet's "My dank and dropping weeds / to the stern God of Sea." 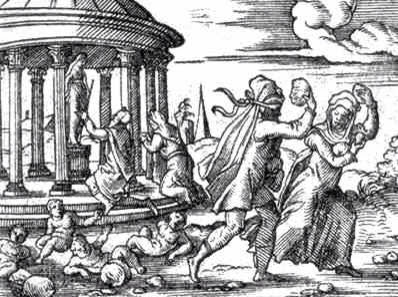 I think one could posit that Milton intended the mood of the original story, the fear and loss of a couple bobbing about on a tiny little island, to echo in his own text. "O how oft shall he / On Faith and changed Gods complain" could allude to Pyrrha's sense of abandonment on her lonely raft. However, there is no complete loss of faith, as in the end the "Stern God of the Sea" is still called upon. Either way, understanding the backstory to these references helped give me some context in my reading, and I'm excited to see if Pyrrha pops up again in Milton's work.

Posted with Blogsy
Posted by Lainey at 11:36 AM