Milton is my Peaches and Cream

I love pie more than life itself. It's a problem. I've missed parties and study groups and occasionally classes for the sake of baking up a pecan or chocolate banana tart. You know how they say depression or anxiety starts becoming an issue when it begins to change your behavior and relationships with others? That's how I am with pie. I regret nothing. 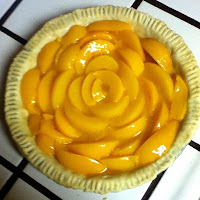 It hasn't always been this way. This one time when I was six my mother gave me a slice of pumpkin at Thanksgiving and told me it was cake, which it most definitely was not. Apparently ground pepper isn't the same thing as nutmeg. This betrayal spurred an all-consuming hatred for pie that lasted through high school. To snip a long story short I eventually made a peaches and cream pie for a school project and realized pie was awesome when baked properly.
If I may force a metaphor,  poetry was and is this way for me as well. Until sophomore year in high school I shied away from anything with "meters" and "stanzas," and the only thing I could force myself to write was a limerick about a cat who ate so much he exploded.
But then along came a little book called Paradise Lost that completely remodeled my perspective. It was difficult and confusing and just a little bit weird, but the gorgeous words flowed in such away that, after finishing, I finally found an appreciation for the poetic genre and classical poetry in particular. I owe my choice of course of study to Milton, along with my love for the English language in general, and I am ridiculously excited to be studying his life and works this semester. Almost as excited as I am for pie.
Posted by Lainey at 1:52 PM

Email ThisBlogThis!Share to TwitterShare to FacebookShare to Pinterest
Labels: posted by Elaine