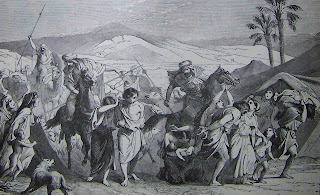 So while I was rereading Milton's sonnets of the Psalms, I noticed that Milton seems to use ethos as his primary device in making his appeal for God, especially in Psalm 114. While pathos and logos are definitely also present in the text, Milton writes "Jehovah's wonders were in Israel shown, / His praise and glory were in Israel shown (5-6)." In the line before the author references the "strength of the Almighty's hand (4)" as the reason for the Israelite's success, and later we find allusions to God's divine power in the earthquakes and floods referenced in the original psalm.

While these could definitely be interpreted as logos, pathos, or a combination of the three, I think these aren't used an emotional or purely logical appeal, but instead a testament from Milton's point of view of God's very real divine powers. Milton is in a sense building a bit of a resume for God, writing up the miracles of Biblical times and pointing out a very practical reason He should be revered and worshipped.

I'm interested to see if this pops up in Paradise Lost and Milton's other religious works, and I'll look forward to spotting it in the future. This is a great version of the poem, and has some pretty handy footnotes as well.
Posted by Lainey at 1:03 PM