It's been so interesting to see how Milton uses rhetoric implicitly as well as explicitly to get on the good side of his audience. In his first Prolusion he even goes as far as to state the rules:


It is a frequent maxim of the most eminent masters of rhetoric, as you know well, Members of the University, that in every style of oration, whether demonstrative, deliberative, or judicial, the speaker must begin by winning the good will of his audience; without it he cannot make any impression upon them, nor succeed as he would wish in his cause. If this be so (and, to tell the truth, I know that the learned are all agreed in regarding it as an established axiom), how unfortunate I am and to what a pass am I brought this day. At the very outset of my oration I fear I shall have to say something contrary to all the rules of oratory and be forced to depart from the first and chief duty of an orator. For how can I hope for your good-will, when in all this great assembly I encounter none but hostile glances, so that my task seems to be to placate the implacable? 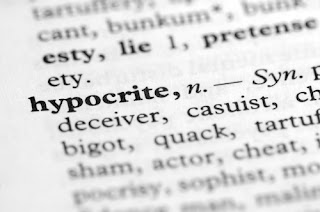 In expressing that he is more humble than those who have the fortune to win their audience, he does not patronize his audience, therefore, ironically, winning their trust. It is Milton's use of what he outwardly condemns that I feel completely characterizes him as one of the greatest authors of all time. It is this characteristic that leads me to the question, is Milton's condemnation of what he uses hypocrisy if it is for a "righteous" cause?

Oxford Dictionary defines hypocrisy as "the practice of claiming to have moral standards or beliefs to which one’s own behavior does not conform; pretense." When denouncing hypocrisy Christ explicitly reproved the hypocrites who "draweth nigh unto [Him] with their mouth, and honoureth [Him] with their lips; but their heart is far from [Him]" (Matt. 15:7-9). What, then, about the people who express affiliation with the sinful world in order to slip virtue into it?

In his Comus, Milton uses an excessively worldly media form, the masque, to convey Biblical virtues such as Chastity. The art form itself is almost inherently gaudy and secular. Is such use of this form for an overtly religious theme a claim, as Oxford defines, "to have...beliefs to which one's own behavior does not conform"? In the same vein, is using the Epic for one of Christianity's paramount myths as done in Paradise Lost "pretense"? How will our answer change once we realize that Satan is in fact the principal actor in the Epic?

The more of Milton I read, the more I see how layered his thoughts and execution of thought actually are. I'm coming to realize that one use of rhetoric Milton excelled in was rhetoric as a way to converge two worlds of thought and helping others see the other side. He brought the exploration of sin into the Christian world through Satan in Paradise Lost. He brought exploration of virtue into a world of excess in Comus. Milton's use of kairos, audience, and decorum allowed him to say things to people that would not normally hear. Milton's use of rhetoric often produced from his large audience a surprising, if not involuntary, understanding of others. The power of words is strong and the influence Milton had, I believe was, overall, good. But was he honest?
Posted by Jessica at 11:35 AM