Pointing Fingers: "The Doctrine of Responsibility"

It shouldn't be surprising that there are times while reading Paradise Lost and while discussing the story of the Fall in general that I have been affronted/offended/indignant of the blame and inherent sin that is associated with Eve and the rest of the female sex. I don't think I have to label myself as a feminist to resent that smear for simply being born with the sensibilities of a woman.

So it wasn't Eve's fault that humanity fell? 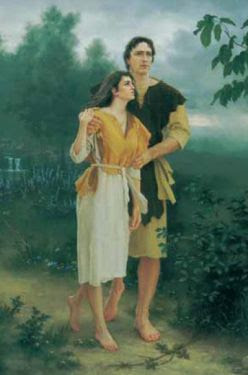 Well, I don't think it is fair to put the entirety of the blame on Eve. When someone makes a big mistake what do we look at to figure out why? Their background, their understanding, their environment, their influences, and their relationships.

It was Adam's fault, then?

Some see it that way. "Dennis Burden cogently argues that Milton would not allow so important an event as the fall to occur under circumstance arrived at only by chance...To exercise independent choice, says Burden, is a liberty improper to woman." He argues that it was actually Adam's fault that Eve ate the fruit because with his higher intellectual reasoning power should not have given into her passion and weaker intellect.
Frankly, I resent that argument, too.

The pointing of fingers as far as the fall goes gets complicated and sticky. Part of me thinks its not really that important, as far as what we are supposed to do now. It happened and we are trying to the best with what we are left with now. What I think is really interesting is that this whole experience of innocence and immortality that fell to misery and sin was great preparation for Adam and Eve in their future roles as parents. Vital definitions and understandings of righteous characteristics were put forth...


Christ, when he comes down to talk to Adam and Eve, illustrates this learning process in the following situation.

"And though God
Made thee without they leave, what if thy son
Prove disobedient and reproved, retort,
'Wherefore didst thou beget me? I sought it not,'
Wouldst thou admit for his contempt of thee
That proud excuse?"
(Loc. 21069)

Adam and Eve hadn't been alive for very long...and just eating the fruit didn't suddenly fill them with all of the knowledge they would need, it just opened that capacity. The experiences after and their emotions seem to go quite fast paced, from being upset, to reconciling, to brainstorming and determining what they are next going to do. Almost like a crash course at life before everything hits them like a ton of bricks.

An incredible amount of soul-stretching would have had to occur as they prepare to leave the garden and everything from then on. And knowing that they were the Mother and Father of Mankind would have been so stressful! To know their names would be relayed throughout all of history...it would have felt like the entire course of history was upon them. I honestly don't envy them that position...but I am grateful that Heavenly Father was merciful and gave them the experiences they would need to help them grow and learn, survive and thrive so we get to all be here today! Yay for hard choices and challenges that allowed our ancestors and us to grow.

Email ThisBlogThis!Share to TwitterShare to FacebookShare to Pinterest
Labels: Adam and Eve, posted by Elise, The Doctrine of Responsibility, The Fall