Paradise Lost and the Fall: Men as Superiors

As a modern reader of Paradise Lost I am always tempted to look at Adam and Eve as equals and apply that belief to the story. But the fact of the matter is that Adam and Eve are never equals in this story. Adam is always superior. This should be unsurprising given the anti-feminist movement going on during Milton's day. He would have had easy access to the pamphlets circulating, as scholars such as Shannon Miller suggest. It's easy to read Milton's poem and think, "Yeah, here's another example of misogyny," yet the arguments between Adam and Eve in Book X of Milton's poem actually allows readers to consider the whole premise of the Fall. Women during Milton's day were looked at as seducers because of the interpretation of the creation myth, and so any arguments women made for themselves were looked at as seductive and not to be trusted. So when Adam blames Eve when God asks what's up, he has a perfectly valid excuse for blaming her: she was obviously up to no good. What's a man to do when she can't even open her mouth without trying to sway him from his will?

So how does this all tie in with my first idea, that Adam is always superior and never looks at Eve as an equal? Well, it has to do with the many Adam and Eve creation myths circulating out there.
I knew there were other creation myths, but until my African American Literature professor, Dr. Cronin, brought it to my attention, I didn't realize there were multiple Adam and Eve myths. In some myths, Christ is the serpent, not Satan (doesn't that make Moses's serpentine staff make more sense?). Not all of the myths make Eve out to be the horrible person that Adam makes her out to be in Book X.

My professor informed me that the Judaic and Christian creation myth we know is actually a combination of many of the myths that were circulating when Judaism was just becoming a religion. And assuming that this myth was crafted from several others, that means that Eve was intentionally made to be the one that made the mistake, and Eve was intentionally told that she should be submissive to her husband from that point on. The myth can be looked at in a feminist light to reveal that the myth serves its purpose of creating a reason for men to suppress women. Women are obviously not able to make good decisions; women obviously need to be told what to do or they won't choose good things; and when women want to govern themselves, men can use this myth to condemn them in the name of God and religion.

This may seem a little radical. But I believe that it helps me understand that Milton is functioning under his religion, and no matter how radical he is, he's got to function within his beliefs. And those beliefs are going to be steeped in that creation myth. And so it has less to do with his reenactment of the anti-feminist arguments going on during his day in books nine and ten and a lot more to do with who comes out on top: Adam.

And a little something else to send you away with on arguments today (satirical, but also arguments I've heard, specifically the one thing women have going for them) for why women are inferior: 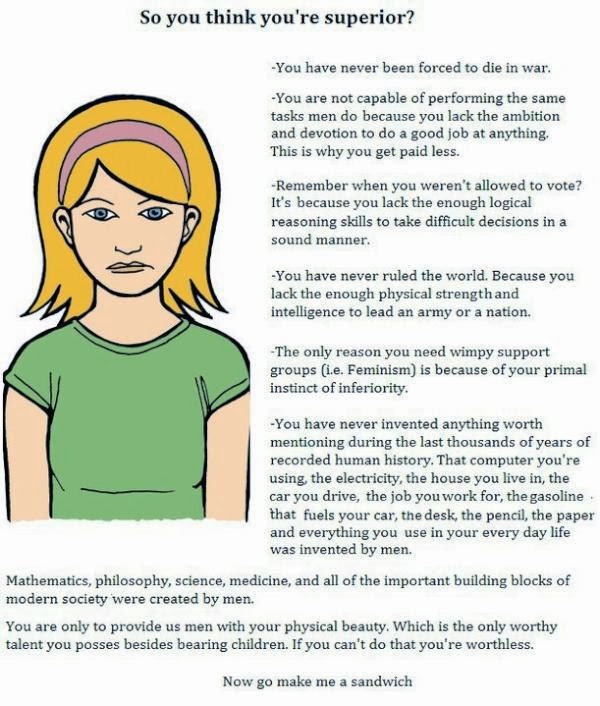 Sound like versions of why Eve can't be allowed to reason for herself anymore?