Eve, the Mother of All 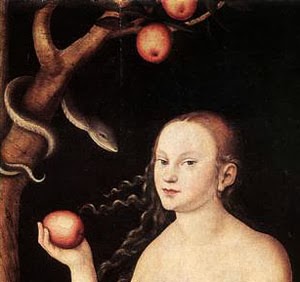 It is interesting reading Paradise Lost because I have to constantly remind myself that Milton and I do not share the same beliefs. He paints an image so vivid and at times, similar, to what I imagine that when we have conflicting views, I have to remind myself that he is just a man who wrote this book hundreds of years ago for himself. For example, I cannot quite reconcile myself with his portrayal of Eve, the mother of humanity.

Book IV exemplified some ways in which Eve acts "deferential" to Adam and recognizes her own secondary behavior. She is aware when Adam has to transmit everything he hears from God and Gabriel to her. Milton also characterizes her with beauty and golden curls and love. Eve also spends much time staring at herself in the stream, admiring herself-very much reminiscent of Narcissus. It is only when Satan sets upon her that she begins to question her role. How does Milton's interpretation of Eve add dimension to Paradise Lost and even shift the focus from Satan?

Currently I am in a class that explores Transatlantic Literature from a Feminist perspective. Sex relates to biology, whereas gender relates to roles and characteristics of said sex. We have not talked about Eve from a feminist view, but I think we all know that Eve is brought up whenever gender roles are discussed.  In fact many people, even whole religions, blame Eve for the Fall. As a result, women are thought of as vain, fickle and debtors. Is the story of the Fall the reason why women were treated as second-class citizens in many societies until the nineteenth and twenties centuries? American men were voting in colonial times, African-American men could vote in 1870 and women were finally allowed to vote in 1920. Do delays of rights like these reflect Eve's behavior in the Garden on Eden and are a subliminal punishment of sorts for women?

Cynthia Scott argues on this website that the Fall was a result of Eve's quest for identity. Scott argues that Eve's desire for identity is akin to Satan's rebellion against God. She says it so well here: "In other words, when Adam is convinced by Eve to choose his own desires over obeying God's word, he is making the same false choice as Eve. By believing that Eve's place in his relationship with him is greater than God's, Adam thus validates Eve's identity as separate from his own and God's. Eve's desire for identity is the catalyst for her fall from grace, which establishes Milton's representation of her not as self-definition but as vanity, a far greater sin than Adam's loss of identity in relationship to God". Personally, I have always thought Paradise Lost was mostly about Satan, but what Scott implies is that Eve trying to distinguish herself from Adam's helpmeet and as her own individual, which eventually leads to the Fall is a far greater sin than Adam losing his Godly connection.

The subject of Eve and her actions will probably impact us further on in the book, but for now, these are some of the thoughts I have regarding Eve. Scott introduced a new perspective to me and I look forward to reading Paradise Lost with an attuned eye to Eve.
Posted by ash at 8:25 PM

Email ThisBlogThis!Share to TwitterShare to FacebookShare to Pinterest
Labels: posted by Ashley