As we read Areopagitica we were prompted to look beyond the obvious notion that Milton is refuting the censoring and licensing of written text. So that is how I've been reading it. And what I've found so far (in the first half) is quite intriguing...and a little bit scary.

Milton is making the case, that is to say, he is more concerned with what will happen to the government and state as a result of censoring books than he is at the fact that his books will need to be censored and licensed (although he has a major beef with that.) He is afraid of what it will lead to. It's apparent through his other writings that Milton is good at extrapolating and coming up with potential projections of his ideas. And his projection, coupled with past examples, is not a great one. 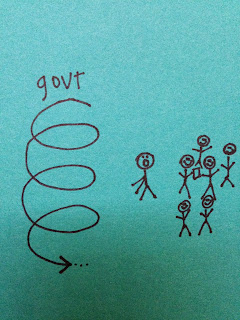 He brings up examples to illustrate his point citing the latter reign of Rome ("From hence we shall meet with little else but tyranny in the Roman Empire, that we may not marvel, if not so often bad as good books were silenced"), the Roman Catholic Inquisition, as well as an offshoot, the Spanish Inquisition, ("but from the most anti-christian council and the most tyranneous inquisition that ever inquired.")
In a way, it's similar to how some people are looking at the government in the U.S. now. Milton saw tendencies and recursions to past institutions that either ended badly or were from the start, corrupt. Some today claim/fear that the current government is okay with ideas that were held in regimes past that are very un-American and exactly what our forefathers fought so dearly to protect. And we can see the outcries from those that are watching and paying attention (I don't claim to be one - though I am trying to find my niche in it all.)
Milton knows history - there is no denying that - and while at the first, most accessible level, it might be a treatise demanding freedom of speech (or the freedom to let speech be "tried" by the public) it is really a warning and command to stop before the path is too far tread they lose what they have been fighting so hard to attain.

Email ThisBlogThis!Share to TwitterShare to FacebookShare to Pinterest
Labels: areopagitica, posted by Elise