Beauty and Hatred: Satan's Relationship with Eve and Nature 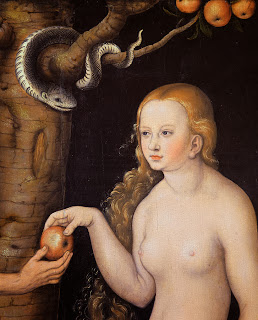 I have to say I'm fascinated with the character of Satan. And now, he's gotten even more intriguing in his interactions with Eve. I'm particularly interested in how Satan views himself in regards to God, nature, and even Eve. At this point, Satan seems to be in this state of instability in that he has this mixture of both hatred and awe for Eve and her blinding beauty. Satan seems to operate in this paradox of being fallen and yet being stirred up in realization of his fallen nature. He's constantly realizing that perhaps he was wrong in his convictions and yet he refuses to redeem himself, thinking he is beyond help, regardless of whether he is or not.

I saw this instability several times in this book, especially when he says that he can not enjoy the simple pleasures of nature, saying, "all good to me becomes / Bane; and in Heav'n much worse would be my state." Satan seems to constantly have these moments when he sees the grand beauty and goodness of the earth and nature and instead of it pleasing him, he almost despises it. He acknowledges the goodness of the beautiful nature and is in awe of it, but he hates it. It's this interesting dynamic going on that has him in this paradoxical state.

The same thing happens on a more powerful level when he comes across Eve. When Satan first sees her, he is astonished at her beauty and grace to the point that his convictions are shaken for a moment. It says, "her graceful innocence, her every air / of gesture or least action overawed / his malice." But then he recalls with bitterness that this pleasure is not his and "fierce hate he recollects, and all his thoughts / of mischief, gratulating, thus excites." Satan's pride and hatred comes back, stabilizing his conviction to destroy mankind, including Eve. What's interesting is how it's Eve's beauty that shakes Satan up so much into a moment of uncertainty. This tension of the hatred of Satan and the terrifying beauty of Eve is something I'll have to look at more.
Posted by Heather Moon at 10:06 PM