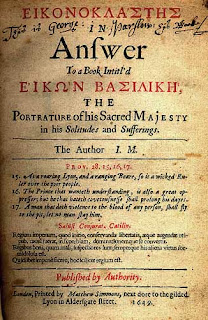 As an American, the concept of a monarchy is a rather romantic notion. For Milton, not so much. In his text  Eikonoklastes, his main argument is that there is a deep-rooted tyranny in such an establishment, and through the case of Charles I, and his refutation of the monarch’s ideas, Milton leaves the reader with a sense of his dissatisfaction with this particular kind of government.

Considering Eikonoklastes can be viewed as condoning regicide, it’s not much of a surprise the document gained less of a readership than it might have if it had not been published in a period when Charles I was comparatively popular. However, Milton’s main points have survived, and may be applied to other rulers, not just the ill-fated Charles. 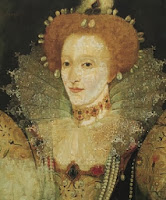 Take Queen Elizabeth I, a personal favorite of mine. Professor Burton mentioned in class that she was fairly lenient with her Catholic population until they tried to kill her, an event known as the Revolt of the Earls which took place in 1569. At this point her actions and those of her advisers became rather more strict in nature. While this is a rather condensed version of the proceedings, Milton’s claim may be observed. Elizabeth I didn't go into her reign with the intention of persecuting Catholics, but in a sense she became a figure similar to her sister Mary, whose persecution of the Protestants is more widely known, and may be viewed as tyrannical.

Eikonoklastes, while certainly a text directed at the present, has a farther reaching purpose. Through it Milton expresses his dissatisfaction with his own government and its past permutations, leading his audience to question the integrity of future regimes and their own part in this cycle of tyranny.
Posted by Lainey at 6:48 PM

Email ThisBlogThis!Share to TwitterShare to FacebookShare to Pinterest
Labels: Elizabeth I, Monarchy, posted by Elaine