Text-2-text connections! And a chart.

So I'm ready to get back to Paradise Lost.


Okay, I've been trying to figure out a way to bring Brave New World into this blog post because I feel like it's saying something similar. Yes, it's a dystopian novel like many others that include the idea of an all-powerful government, but there was something else there that I knew I could mention. Then I read this:

"Henceforth let no man care to learn or care to be more than worldly wise, for certainly in higher matters to be ignorant and slothful, to be a common, steadfast dunce, will be the only pleasant life, and only in request."

Humans in Brave New World are manufactured to develop different amounts of intelligence. Alphas are the smartest, Betas are next, and so on until you reach Gammas. It looks like Gammas lead a pretty rough and/or dull life--some of their jobs include simply standing by an elevator to watch people walk in--but they are happy with their lot because they are created to think that this is as much as life can offer them. They aren't jealous of the Alphas or Betas and they're technically happy. But that is sad to me. :(
Is there much more to talk about in reference to Areopagitica? Maybe not. But... there you go!


"A man may be a heretic in the truth; and if he believes things only because his pastor says so or the Assembly so determines, without knowing other reason, though his belief be true, yet the very truth he holds becomes his heresy."

This brought to mind "Pascal's Wager" which is a philosophical argument about betting on whether God exists or not. According to this chart, you're just better off betting on God existing--whether he actually does or not. 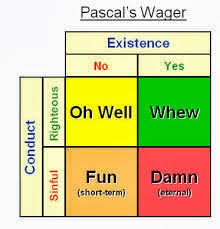 We were talking about this in French, and this logic just doesn't do it for me, as I'm sure is the case with a toooon of other people, too. It's logical to live a life or righteousness because the benefits of that--however things turn out after death--outweigh doing the opposite. BUT without true intent and actual faith, doesn't that just kind of defeat the purpose? Sure, you'd be living a good life centered on service and goodness, but you're heart is only in it because it just makes more sense to do it that way.
Posted by Miss Anthropy at 10:45 PM