"And if [ministers] keep their learning by some potent sway of nature, 'tis a rare chance, but their devotion most commonly comes to that queasy temper of lukewarmness that gives a vomit to God himself..."

This interpretation of Revelation 3:16 given by Milton in his treatise "Of Reformation" might have hit audiences like this hits us: 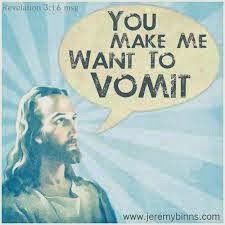 Milton pulled no punches when it came to condemning the aristocracy of the Church. I think it's safe to say that he was not in agreement with the top-heavy authority in Church or State. He definitely took a very vocal stand against it and this is what separated him from very recent Renaissance culture and concept of the self. (For reference of how rulers were expected to be treated, see the Introduction to the King James Bible published shortly before in 1611. Nice and flowery.)

On the other hand, the Romantics were said to think of the self in more free terms as "always independent from society and effectively independent from God" (Stevens, 263). Was Milton the first Romantic then? Stevens argues "nowhere is this conception of a transcendent self . . . more accurately represented and valorized than in the figure of Milton's Satan" (Stevens, 263). The reason one critic, Paul Stevens, gives is that perhaps he may have in part agreed with these ideas of freedom, but that he did not "wholly" commit to the idea.

There is no denying the apparent contradiction in applying some of his own, most publicly lobbied values to the culturally acknowledged embodiment of evil itself. But could that be because he, himself was conflicted?