Reflection from Within: Satan's Transformation 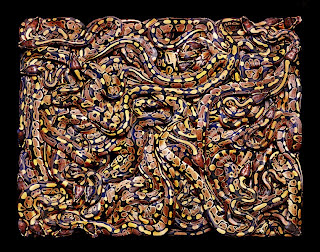 I was a little surprised at the transformation of Satan and the devils into serpents in book 10. I wasn't really expecting that to happen. It was interesting because I remember how in the beginning of Paradise Lost, I was struck by how the demons and fallen angels were much more human than I anticipated. However, now, it seems that they've lost their humanity and became "thick swarming now, / with complicated monsters head and tail."

When I read this section, the big question that came to my mind was whether this transformation was simply reducing the demons of hell to a monster-like state, or showing them a reflection of their souls. I remember how in the beginning they looked rather fair and even the description of Satan himself was like the description of a prince. Now, these monsters seem to reflect their true nature of malice and hatred. It's mentioned that the serpent  "and color serpentine may show / thy inward fraud, to show all creatures from thee." Their new appearances seem to reflect their true natures. Now these devils seem to be truly cursed. Instead of simply being banished to Hell, they are transformed and become creatures of Hell.

An interesting fact was the devils' reactions. They seemed to be horrified by the transformation, showing their own disgust at their appearances. Even Satan was surprised and disgusted by his new form. This makes me wonder of the relationship of how Satan sees himself and how his soul truly is. Satan may see himself as a stately prince, or a fallen angel, but perhaps his true form is a slimy subtle serpent. I suppose it's part of the idea of how Milton portrays Satan as the main protagonist in this story. In this case, is Satan's transformation supposed to be a victory or a tragedy in the minds of the readers? I'll have to look more into this.
Posted by Heather Moon at 10:44 PM