Do not read this

And here you are--reading--despite being told not to. Can't help it, right? What makes this post so forbidden, you ask?
The answer: nothing.
But please do read on, by all means.

Much of my post is essentially summed up in this pretty bit of poetry by our friend Milton:

One fatal Tree there stands of Knowledge called,
Forbidden them to taste: knowledge forbidden?
Suspicious, reasonless. Why should their Lord;
Envy them that? Can it be sin to know,
Can it be death? And do they only stand
By ignorance, is that their happy state,
the proof of their obedience and their faith?

Now, I don't think God was intentionally giving Adam and Eve a hard time by placing the biggest and prettiest tree right in the middle of the garden with very strict rules attached--(NO TOUCHY)--but I do think it was a test of faith and obedience that He personally needed. 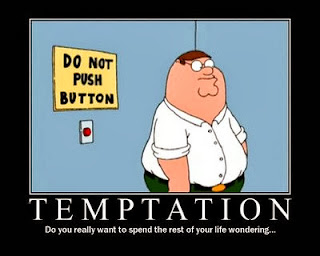 (Also...have you heard the bird is the word?)
Adam and Eve are in Eden. This place is perfect--one could go so far as to say it's edenic. Doesn't it sound lovely? What kind of temptations or troubles could paradise bring itself to present to these two innocent beings? That's where God decided to take charge (as if He wasn't in charge of everything since all the time...)
Satan sees God's placing the tree in the garden as "suspicious and reasonless", but of course he's being paranoid. I feel like God just needs to know that his creations are willing to love and obey him without putting them into too nasty of a situation. God is someone that needs love to be proven to Him every now and then...at least that's how I've been interpreting it.
In today's world: there are a few commandments that I don't see as crucial as some, and others that I fail entirely to detect any sort of evil or sin, but I'm coming to see that protection from the things that are harmful to us spiritually or physically is not always the point: sometimes the point is to obey those commandments because God is kindly asking us to.
For my next post! I will want to focus more on if the knowledge gained from eating the forbidden fruit is, in and of itself, evil. Which I don't believe it was... or is. To an extent, of course--but 'til next time!
Posted by Miss Anthropy at 12:46 AM