In Milton’s Aeropagitica, we see Milton come down hard and forcefully on censorship of any kind while he champions the importance of books and a free press.  Much has already been written (including on this blog) about censorship in our modern day.  I hope to add just a little bit by looking at one connection that I saw as I was reading. 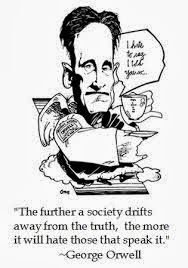 Milton quotes Sir Francis Bacon saying, “The punishing of wits enhances their authority… and a forbidden writing is thought to be a certain spark of truth that flies up in the faces of them who seek to tread it out” (32516-32518).  I realize that he was speaking specifically about “sects and schisms,” but when I read this it reminded me of something George Orwell wrote in his essay “Politics and the English Language.”  One point of Orwell’s essay was showing how the way in which we use language changes the way that we think, or are able to think (Orwell can explain it better).  He said, “But if thought corrupts language, language can also corrupt thought.  A bad usage can spread by tradition and imitation, even among people who should and do know better” (2391).  Orwell tells of people becoming machines because they have essentially stopped thinking for themselves and have instead learned to parrot the same stock phrases and words that they have always heard (essentially, this is why politicians all sound exactly the same).

Orwell would later expand on this idea in his novel Nineteen Eighty-Four.  When people talk about Nineteen Eighty-Four or “Big Brother” they mostly think of invasion of privacy and government surveillance.  This is what people most think of when they talk about living in an Orwellian dystopia.  Something that is often overlooked is the role of propaganda in controlling the minds of the citizens—propaganda that comes from the so-called “Ministry of Truth.”  In the story, the government is able to control peoples’ minds and thoughts in part by controlling what they read.  It’s important to remember that censorship not only blocks books, articles, works of art, etc. from being published, it also promotes other works, generally books, articles, works of art, etc. that work as propaganda for whoever is in power.

Orwell wrote about how bad writing and the promotion of such writing makes people stupid and makes them unable to think for themselves.  I think Milton would agree whole-heartedly with that idea.  Anytime only one point of view is allowed, original thought is stifled.  Milton wrote that the licensing “hinders and retards the importation of our richest merchandize, truth” (32574).
More than just preventing good works from coming to light, censorship stimulates bad works, works that suppress originality of thought in favor of mindless conformity.  As Milton said, “Truth is compared in scripture to a streaming fountain; if her waters flow not in a perpetual progression they sicken into a muddy pool of conformity and tradition” (32521-32522).

Orwell, George.  “Politics and the English Language.” The Norton Anthology of English Literature:  The Twentieth Century and After (2006).  Stephen Greenblatt, ed.