I've been fascinated by Milton's portrayal of Eve and have been looking for article pertaining to Eve's impact on the identity of women. Thus far, I have had little success. However, tonight I searched for "Milton and Eve," and I was astounded by the amplitude of material I found! In one article, it basically said Eve is the most important character in Paradise Lost, aside from Satan. I've compiled some quotes of why people incriminate Eve, and eventually I hope to post why it is inaccurate or for what purpose Milton wrote Eve as he did. 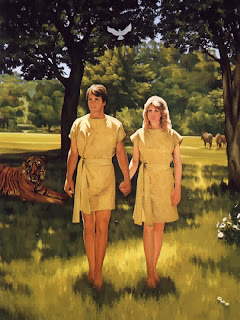 "To start with, Milton was a man of his time, the Early Modern Period. His purpose is to ‘justify the ways of God to men;’ women don’t enter into it" (Wayment).

I find this thought curious, as I didn't even think of that when rereading and memorizing the beginning lines of Paradise Lost. "Justify the ways of God to men"-I doubt that Milton wrote that line to purposely exclude men, but it is an interesting idea.

"In Milton’s complex theology, both men and women bear guilt for the Fall—but woman’s guilt is greater, not only because she sinned first, but because she uses her female wiles to get man to sin as well. Man’s sin is less than woman’s because she ate the apple for power and greed, while he ate for love of her" (Wayment).

This seems particularly vindictive of Eve, yet I can see how readers would compare the "level" of sin and the motives behind the sinning. I do think Milton portrays Eve as questioning, submissive and discontent in the beginning...far more than Adam, to be sure.

From a Historical perspective (Pick me!)

"Eve represents everything about a woman a man should guard against. In both form and symbol, Eve is woman, and because of her, the prevalent belief in the West has been that all women are by nature disobedient, guileless, weak-willed, prone to temptation and evil, disloyal, untrustworthy, deceitful, seductive, and motivated in their thoughts and behaviour purely by self-interest" (Witcombe).

Witcombe uses many historical references to show that people have used Eve as a universal example for women and sinners.

"In the West, the story of Eve has served over the centuries as the principal document in support of measures and laws to curtail and limit the actions, rights, and status of women" (Witcombe).

How shocking is this? The misinterpretation of the Biblical story has constituted as evidence to prevent women from gaining certain rights. I could see how Milton's portrayal would support these actions, but using Genesis in rather different.

"The argument that the order of creation, in which Adam was created first and Eve second, indicates hierarchy and therefore Adam's superiority ignores the fact that animals were created before Adam. As Adam is superior to the animals, then the hierarchy of creation should be reversed, and Eve seen as God's ultimate creation" (Witcombe).

I think this idea is rather touching, but contrary to the claims of those accusing Eve of sin and submission.


As we get farther into Milton's work, we will find more evidence to support the misguided identity of women due to the portrayal of Eve. Are these claims justified? How do we see them in society? Do all of women's injustices go back to Eve?
Posted by ash at 7:47 PM

Email ThisBlogThis!Share to TwitterShare to FacebookShare to Pinterest
Labels: Eve, posted by Ashley