What is Ambition: Milton's Look at Satan and Jesus 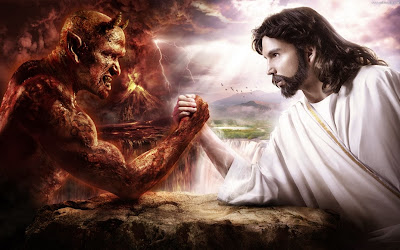 Some things I noticed in Paradise Regained is the portrayal of Christ, and how Milton does it a little differently than in Paradise Lost. In Paradise Lost, Christ is the Son of God who fights against Satan and wins, returning to our Father in Heaven in triumph. However, in Paradise Regained, Christ is a little more vulnerable, showing human weakness, such as feeling hunger and having "dreamed, as appetite is wont to dream / of meats and drinks, nature's refreshment sweet." Milton seems to give Jesus more human qualities as he is now experiencing human temptations.

Another interesting thing is the reference to Christ's ambition. He states in book 1 that he entertained the thought of doing great things, saying, "victorious deeds / flamed in my heart, heroic acts, one while / to rescue Israel from the Roman yoke." Christ, much like Milton seeks to go beyond the usual mark, to do something heroic and achieve things "not yet attained." This reference to Christ's ambition interested me because I usually associated Milton's ambition to be likened to Satan's ambition in Paradise Lost. We linked Satan's ambition and pride to be his downfall. However, now that Christ seems to have ambitions and dreams, it causes me to have a second look at what is driving these characters and what is driving Milton.

I guess the question now is: what purpose does ambition serve? Is it alright to have ambition? Can Christ have ambition like Satan and still be the Son of God? I think maybe the difference that Milton manages to show between Christ and Satan in Paradise Regained is that while Christ, like Satan may have ambitions, he still answered to God. Perhaps where Satan went wrong is that he took it just a little too far. Perhaps that is why when Satan tries to tempt Christ, it doesn't work for a second because Christ has found that balance between ambition and obedience to God. That balance can never be obtained by Satan because he refuses to give a little of his ambitions and listen.  It's an interesting thought, one that I hope to explore a little more in my paper.
Posted by Heather Moon at 9:36 PM