Behold my working thesis in all it's glory:


Areopagitica decries statist information gatekeeping as “contrary to the manner of God and of nature;” ironically, after the reinstated monarchy imprisoned Milton and publicly burned many of his political tracts, he apparently reverses this claim through a revelation from Michael invented for the final book of Paradise Lost.

The portion of the revelation referenced above that supports this argument is the retelling of the fall of Babel. In the paper this thesis has grown out of, I claimed that the Tower of Babel situates the following statement by Michael within the context of communication and human progress:


Since thy original lapse, true liberty
Is lost, which always with right reason dwells
Twinned, and from her hath no dividual being…
Therefore since [man] permits
Within himself unworthy powers to reign
Over free reason, God in judgment just
Subjects him from without to violent lords. 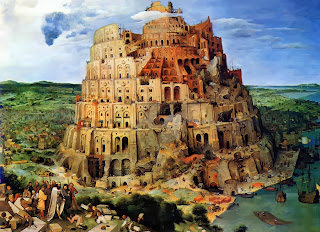 While I haven't yet excavated a source contemporary to or predating Milton that corroborates this contextualization of Babel, I stumbled into an article that affirmed it via "the Netziv, writing in the nineteenth century, and later cited approvingly by Lord Sacks." Netziv "interprets 'the whole world was of one language and of one speech' (Genesis 11:1) to mean that freedom of expression is suppressed in Babel." This same article discusses the political implications of the biblical Babel story in connection with, interestingly, Thomas Hobbes' Leviathan. This historical/political intersection might prove to be very fruitful, especially if there's any merit to the claim that Paradise Lost can be viewed as a critique of Hobbes' Leviathan.

Further, it looks like Babel was frequently discussed during the English Civil War as a political symbol. I've only glanced at one article that addresses this element and would love any additional sources any of you might have to offer.
Posted by lionbox at 11:03 PM

Email ThisBlogThis!Share to TwitterShare to FacebookShare to Pinterest
Labels: posted by Jake