While reading book four of Paradise Regained I was struck by the number of geographical references Milton inserts into his narrative. For example, lines 247-253 read:

"There flowrie hill Hymettus with the sound
Of Bees industrious murmur oft invites
To studious musing; there Ilissus rouls
His whispering stream; within the walls then view
The schools of antient Sages; his who bred
Great Alexander to subdue the world,
Lyceum there, and painted Stoa next:"

I think it's interesting that Milton uses such specific places in his text, and it leads me to assume that he was using what would have been common landmark references to paint a clearer picture of his Greek setting. Incidentally, I didn't recognize any of them, so I did a wee bit of research to more firmly grasp his meaning.

The Ilissus, or Ilissos, is river which winds through and around Athens. Used for a defensive perimeter and named after a demigod of the same name, the cannaled waterway was viewed as a peaceful, idyllic setting. 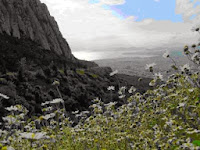 Hymettus is, contrary to Milton's description of a "hill," a mountain range also located in Athens. Also called "Trellos," or "crazy mountain," by its inhabitants, the peaks have been home to marble quarries for thousands of years.

While a lyceum is an educational institution still used in many European countries, the Lyceum proper was a gymnasium and public meeting place in, once again, Athens. Built in a grove of trees, the edifice is most commonly associated with Aristotle's peripatetic school, though it was in existence prior to his endeavors.

Along with his other references, Milton spends quite a lot of time building up the setting for this section, a move which lends the reader a clearer picture of what he or she is reading as well as stronger ties to the Athenian culture and landscape. I'm curious as to where this pattern pops up in his other works, and how his time in the country aided his descriptive powers.