The Greek and Christian Dynamic: Samson as an Unusual Tragic Hero 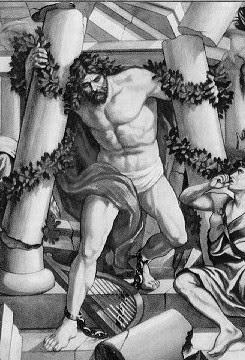 In Samson Agonistes We talked about how there's this tension between the idea of Greek Gods/fate and the Christian God. I read through it and I found that how Samson reacts to his situation actually says a
lot about how he views his God in comparison to other Greek tragic heroes who react to fate.

In most Greek tragedies, the fates are usually against the hero and the hero falls due to some tragic flaw that he has. However, the hero will often curse the fates and say how nothing could have been done because fate was against him. I see this in Oedipus, in that how Oedipus tries to avoid his fate but in doing so, fulfills his fate. From the beginning, Oedipus was meant to kill his father and marry his mother.  He can't avoid it and so he curses his own misfortune and the fates.

However, Samson doesn't have this kind of reaction. It does hint at the idea of predetermination. He laments his fate a bit, and almost seems to question God, asking, "Why was my breeding ordered and prescribed, / as of a person of separate to God / designed for great exploits." In this moment, Samson is questioning his role in life and wondering how things could have gone so wrong. However, then Samson puts the blame on himself and his faults. He says, "what if all foretold / had been fulfilled but through my own default / Whom have I to complain but myself?" In here, Samson demonstrates a remarkable development from the usual tragic hero. He recognizes that it's due to his own pride and faults that things didn't go the way they were supposed to. In this case, Samson still puts his trust in God in order to put things right and continues to serve him.

Milton has shown in previous works to combine elements of Greek and Christian literature, so I'm not that surprised that he would combine elements of Greek tragedies with Christian beliefs. It makes for a very interesting reading of Samson and I like seeing how Milton takes a common element and tweaks it to make it is own. It's what makes him Milton.
Posted by Heather Moon at 10:49 AM

Email ThisBlogThis!Share to TwitterShare to FacebookShare to Pinterest
Labels: posted by Heather