The Incredible Journey through Paradise Lost 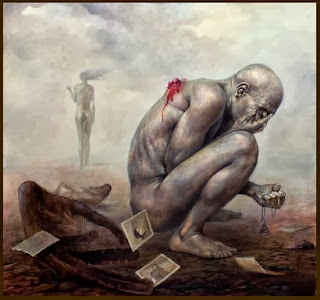 When I was reading Paradise Lost, I was instantly drawn to the character Satan. I found his character, his language and his almost protagonist role to be much more fascinating than any other character in the poem. I knew that I wanted to write my paper on an aspect of him. In one of my posts I talked about how I noticed some human characteristics in Satan  link. Another blog post showed how I had noticed some similarities between Satan and Milton link. I decided to focus on this aspect, which was how my first topic came about. I looked at this relationship from a religious point of view, trying to see how there may be a correlation between Milton's radical religious ideas and Satan's character. However, as I did my social media research and bounced my ideas around with friends, scholars and Professor Burton, I changed my argument to Milton using Satan as a tool to prove that rhetoric and words are separate from morality, thus making Milton's connection to Satan more rhetorical than moral.


First of all, I talked to several friends about my idea. One of them, Cheri, is an English major so she offered some insights into my topic and helped me bounce ideas around. I posted my ideas on Facebook to get feedback on my ideas from friends. Some helped me refine my wording of my thesis.  I also contacted some scholars like Jeffrey Shoulson and Stella Revard, who helped me to look at my argument in different angles, leading me to revise my argument from the religious to rhetorical focus. I also talked with one of my coworkers at the writing center who helped refine my topic more to focus on the fact that Milton is using Satan as a tool for rhetoric.

I kept track of my research through research logs and putting quotes on word documents. If I found a person I thought might help, I wrote down the name and where I got the reference from. When reading sources, if I liked a certain saying, I would write down the quote, who it came from, and if applicable, what page number. I also kept bookmarks of certain webpages, such as the Milton Society of America. My email notified me when people were contributing to the discussion thread that I had posted on MiltonL.
I used Twitter to look up organizations such as the Digital Public Library and various professors. It was actually through Twitter that I found Dr Margaret Kean, a professor well versed in Milton. I also used Academia.edu and MiltonL to connect with other scholars and Milton enthusiasts. I worked through the Milton Society of America to find papers and people doing research on Milton and Satan.

As for traditional scholarship, I worked mainly through books. I searched a few through the library catalog and then I looked among nearby shelves to find relevant information. Looking around nearby shelves actually helped a lot, since I found some books that were actually a bit more helpful for my topic than the book I was originally searching for. I also looked up articles through MLA Bibliography and found some relevant articles. I went to Ebrary and found a book that was really helpful in looking at milton's rhetoric. I used tips from the scholars I had talked to and researched different books and authors.

I decided to submit my paper to the BYU student journal Criterion. I think this paper will be relevant to my audience because the journal deals in mainly literary criticism. The fact that my paper deals in analyzing Milton's rhetorical elements in Satan in Paradise Lost will be relevant to the critical thinking nature of this journal.

Overall, I'm glad for the experience I had in reading Milton's works and learning more about this great poet. It's been a great time and I have a new appreciation for John Milton and his masterpiece, Paradise Lost.

Email ThisBlogThis!Share to TwitterShare to FacebookShare to Pinterest
Labels: posted by Heather