Looking Back and Moving Forward 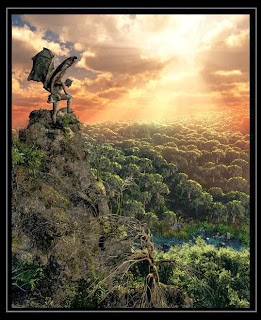 Well, as the semester comes to a close, I wanted to talk a little bit about my research process for the paper that I finished last week on the humanity of John Milton's Satan figure in Paradise Lost. They say that sometimes looking back on where you've been can be one of the most important things in helping you to move forward, and Heaven knows well enough that with graduation soon approaching, I could use some perspective.

All in the all, I really enjoyed researching the topic. It's one of the most fundamental concepts in understanding Paradise Lost, and I felt like there was a little place cut out for me in terms of being able to contribute to the overall conversation. My research really began with Stanley Fish's Surprised by Sin, one of the most influential works of criticism for PL. I started reading it about a month into the semester and got through most of it by the time that I needed to start actually drafting, so it was really influential in terms of helping me to form my research question. I build my question around a question that I felt Fish had neglected to some extent, that Satan can in some sense be seen as a regular human character with regular human vices. As a result, my paper was largely a response to his criticism. I got some really valuable feedback along the way, though, and that really helped to shape my research.


Peers really helped me to better define my thesis, and it helped a lot to have a mini-paper at mid-semester, because it gave me a chance to delve into these ideas a bit and get something more formalized in terms of organizing my ideas. I first distributed a thesis statement on Facebook, from which I got some really useful resources and feedback from friends and peers. I detail some of the responses under the social graph heading in my annotated bibliography. Various classmates provided critical feedback as well, including Jake , who was a sounding board for my ideas throughout the research process, and Heather, who pointed me to C.S. Lewis's Preface to Paradise Lost, which was not only an enjoyable read but was also a big help in terms of better understanding different perspectives on Milton's Satan figure.

In addition to feedback from peers and friends, I got some great resources thanks to some social discovery that I carried out. This post details a response that I received from Paris Kaye, a writer and Milton enthusiast, and here, I talk about the feedback that Harold Bloom gave me. I'm pleased to say that Mr. Kaye has been really interested in my research and has since then contacted me of his own accord to see how my research is going. I'm sending him my final paper for feedback.

In my final paper, I ended up using a number of scholarly resources that I found through other people, including Lewis's Preface to Paradise Lost (thanks to Heather), Jung's Answers to Job (suggested by Mr. Kaye), and a number of others that didn't end up in my actual paper but which helped to shape my thinking about the work as a whole. Overall, however, I tried to emphasize the primary texts themselves, especially Paradise Lost. I ended up using information and quotes from Samson Agonistes, Paradise Lost, Paradise Regained, and "Areopagitica," and I relied heavily on quotation as a way of justifying my claims. This was necessary in trying to meet Fish and his claims, as my claim is one for which I found little secondary scholarship (i.e. pertaining particularly to the idea of decoupling the Satan figure from Satan and seeing him as human).

Anyway, I'm excited to start hearing back from some of the venues that I contacted about publication. I'll keep people posted on any developments. For now, though, that's all. Greg signing out.
Posted by Unknown at 9:17 AM