We made it! Hooray! 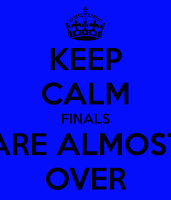 To say I'm completely satisfied with my final paper would be a stretch, but I tend to never be satisfied with my final product when writing a research paper. Always one more thing to add or change to make it better. However, one of the things that strengthened my paper and guiding it to where it ended up was the specific research approaches we took in this class. The process to write this paper was very refreshing, and I even used similar strategies to write a Poe-Hitchcock comparison paper for another class in which I was struggling to find sources for. It was quite the journey, and a good one too.

From the beginning of my experience with Milton's epic, I was intrigued by the character of Satan and his experience in Paradise Lost. Portrayed as a hero, as I discussed in this blog post, he was both likeable and detestable at the same time, probably because we saw within him reflections of our own selves and the struggles we face each day. In writing my first paper for the class, a comparison of the fates of Satan and Eve, I was intrigued by Satan's rhetoric and how closely it resembled Milton's call for freedom in The Tenure Of Kings and Magistrates. I couldn't help but think about how this same mindset is present in modern political thought and my pre-write for my final paper helped me to nail down the connection further. 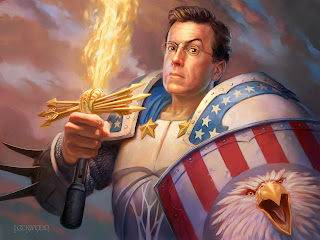 From there I turned to the interwebs, seeking evidence of "freedom" centered rhetoric that proved selfish and destructive like Satan's experience in Paradise Lost. I felt that I wanted to get an idea of what the average American thought about the government restricting freedom and what needed to be done about it. I went everywhere from yahoo answers about "Is the Government taking away our freedom?" to posting the question on Facebook to see what rhetoric people would react with. One of my greatest searches in this field was actually through a bunch of Comedy Central Colbert Reports (How can any true American not love Stephen Colbert, I mean seriously). The satirical comedy was actual pretty helpful in seeing through examples of selfish policies tirading under the banner of freedom and liberty, and gave me a few chuckles to give me energy to push through the research process.

Next came some more professional opinions on the subject, from blogs by government participants like Paul Nevins, to a book I found for a reasonable price on Amazon called America and the Limits of the Politics of Selfishness by political science professor Sidney Waldman at Haverford College in Philadelphia. It was fairly simple to find copious sources to choose from since I was delving into a political subject and a few quick searches with different combinations of "America," "Freedom," "Selfishness," and "Individualism" gave me plenty to work with. Scholarly sources were easy to come by as well. I primarily used JSTOR to find a few articles on Milton and the works I wrote on, and one of the articles Greg mentioned in his research listed proved to be a great help to my analysis of the character of Satan and his extreme individualism. 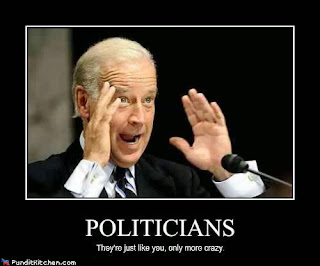 The problem I faced after researching was I had too many ideas about the subject I wanted to write on, and not enough time or energy to cover them all. I felt pretty comfortable in the Milton side of my argument and what I wanted to cover there but what exactly to focus on in the political theory side of things quickly became something larger than I could handle. This is where my interactions with experts helped quite a bit. I wrote an email to Dr Waldman, seeking advice and further insight on the subject discussed in his book but never received a response. However even in struggling to compose an email I thought suitable to send to an expert I found some ground and narrowed my ideas further.

Where I really found success was in turning inward to BYU. I decided to start scrolling through current Political Science classes that were being taught this semester and to see if there were any classes being taught about similar ideas, to find professors who had the topics of freedom and individualism fresh in their minds. This is where I found Dr Ralph Hancock who was teaching a class on Western Political Heritage. I managed to catch him during his office hours last Monday and although I didn't have a lot of time to discuss my ideas with him, he helped to point me towards a few articles he had written and see where I could make my discussion easier to handle in a 10-12 page paper. Great experience.

Deciding on submission was difficult to say the least (nothing more terrifying than putting your work out there to be eaten alive by others) and I finally decided on submitting my paper to Criterion like a few others in the class.

I loved the opportunity to explore different aspects of the research process in this class and discovering Milton through so many lenses. I hope to use many of these methods in the future to enhance my future writing experiences as a student at BYU. And who knows, maybe I just might build up the courage to submit a few other papers in the future to conferences and journals. Sounds pretty exciting to me!