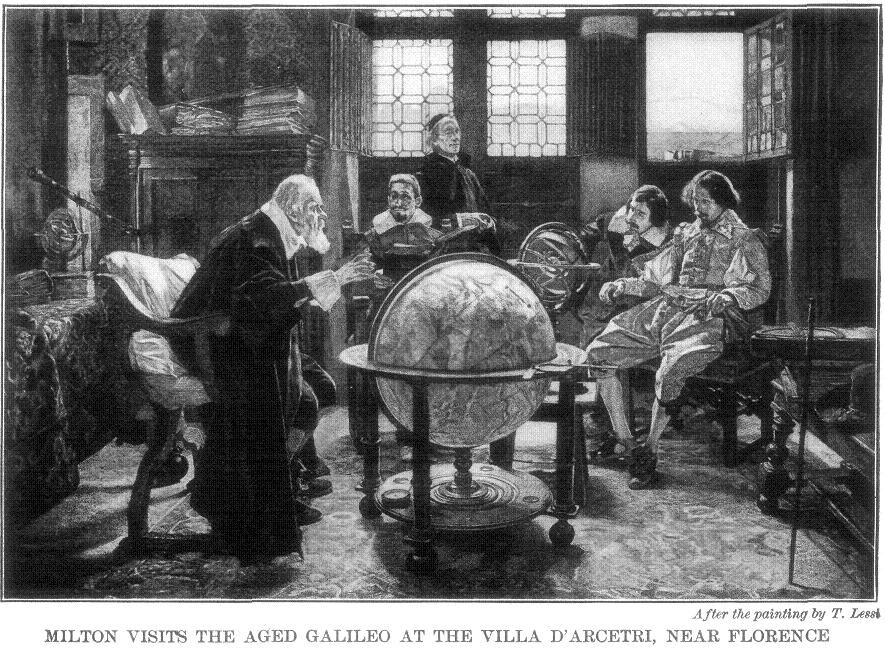 In Book 8 of Paradise Lost, Raphael gives Adam what seems to be a pretty uninformed explanation of the workings of celestial bodies. He finally tells Adam to "solicit not [his] thoughts with matters hid," but to instead "leave them to God above."

Up to this point in the poem, Milton hasn't seemed to have any problems being very direct on sensitive issues of doctrine. Why, then, does he hesitate to make a clear statement on the validity of geocentrism?

The Ptolemaic system explains that the planetary motions center around our Earth. It has a strong history in literature, and many authors (most importantly Dante) found it a strong symbol to use in their works. It traces its roots all the way back to Greek philosophy, and wasn't seriously challenged until Copernicus in 1543. Even then, it took a long while for the debate to resolve, and it was in full force during Milton's time.

One of the strongest voices that opposed the Ptolemaic system was Galileo Galilei.Galileo had been accused of heresy, and would be a prisoner of sorts for the rest of his life. Towards the end of his life, Galileo received an interesting visitor-- a young Milton. Interestingly enough, Galileo had become blind by that point. (Sensing a trend?) In his article "Milton and Astronomy," J. A. Paterson writes, "Milton has not given us any account of this memorable visit, yet it was one which made a lasting impression on his mind and was never afterwards forgotten by him. 'There it was,' he writes, 'I found and visited the famous Galileo grown old, a prisoner of the Inquisition, for thinking astronomy otherwise than the Franciscan and Dominican licensers thought.'"

There is a lot to learn from Milton's description of astronomy. We know he had strong respect for Galileo and had no problem opposing the church's views. Why then, does he seem to ride the fence on the matter of geocentric theories?